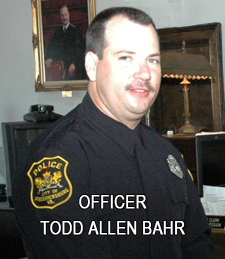 Fredericksburg Police Officer Todd Allen Bahr was shot and killed while searching for an armed suspect near the 2500 block of Manor Court between two City apartment complexes shortly after 11:00 p.m. on June 6, 2008. The suspect, Gregory Berryman, died shortly thereafter during an exchange of gunfire with other officers on the scene.

Todd Allen Bahr was 40 years old and had been an officer with the Fredericksburg Police Department since 2006. He began as a volunteer auxiliary officer and joined the ranks of career officers on September 21, 2006. Officer Bahr grew up in Stafford County and attended Hartwood Elementary, Gayle Middle School and Stafford High School, graduating in 1986.

On June 6, 2008, at 8:30 p.m., an officer responded to an apartment in the 2300 block of Cowan Boulevard, in the Commons at Cowan Boulevard complex, after a female resident reported that Berryman, her former boyfriend, had made threatening phone calls. At 10:50 p.m., officers responded again to the woman's apartment after receiving a report that Berryman was outside brandishing a handgun.

At approximately 11:00 p.m., an officer located Berryman sitting in his vehicle in the Park N Shop shopping center. The officer requested backup, and Officer Bahr responded to the shopping center to assist. When officers ordered Berryman out of the vehicle, he sped away with officers following in a brief pursuit. The pursuit ended in a parking lot of the Residences at Belmont Apartments, another apartment complex on Cowan Boulevard that is next to the female complainant's apartment complex. Berryman jumped out of the vehicle and fled on foot into the apartment complex.

At 11:05 p.m., officers searching for Berryman on the scene reported hearing shots fired. Moments later, one Fredericksburg Police officer and two Fredericksburg Sheriff's deputies encountered Berryman in a parking area near the female complainant's apartment and exchanged gunfire with him. Officer Todd Bahr was found fatally wounded with a single gunshot to the head. Berryman was struck more than once by police gunfire before he shot himself in the head.

On May 5, 1964, 31-year-old Sergeant Roy Glen Wright and 27-year-old Patrolman William Franklin Mines were working the midnight shift in a two-officer car. While checking behind Fredericksburg's Park N Shop shopping center, they came upon Bruce Walter Leikett. Recently released from a federal penitentiary in Pennsylvania after serving time for auto theft, Leikett was at that time in possession of a stolen vehicle. When asked for identification, Leikett produced a handgun and shot the officers before they could react. Both officers, well-respected fathers and members of the community, died at the scene. Leikett then robbed the officers of their cash, service revolvers and handcuffs before fleeing to Michigan. He was arrested on May 8, in Wayne County, near Inkster, Mich., following a high-speed chase that ended in a fatal crash that took the life of an innocent motorist, 21-year-old Joe David Ferrell, who was due to be married the following day.

Leikett was returned to Fredericksburg to stand trial, where he pleaded not guilty to both murders. After a two-day trial, a jury found Leikett guilty. He was sentenced to die in Virginia's electric chair. Shortly after the trial, a technicality was brought up that resulted in the trial being declared a mistrial. Prior to the case being retried, Leikett pleaded guilty to both murders in exchange for two life sentences. Leikett also was convicted of a killing that occurred in New Jersey a day before the Fredericksburg shootings. In that case, John Kersnowsky, an 18-year-old gas station attendant, was robbed and shot to death.

Despite 26 parole board hearing requests and an appeal for medical clemency, which Gov. Mark Warner denied, Leikett was never able to secure his release from prison. He died, at the age of 66, of liver cancer at the medical unit of Powhatan Correctional Center on February 17, 2004. 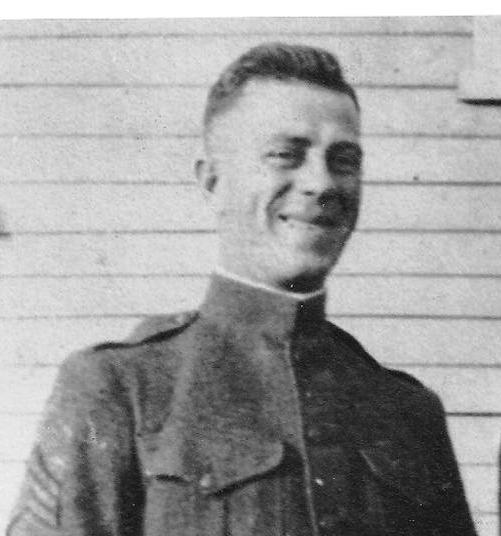 On May 31, 1925, Traffic Officer Ellsworth Alexander Moore, on patrol on his City motorcycle, attempted to stop a speeding vehicle on the Richmond-Washington Highway (now the 1400 block of Lafayette Boulevard). The 27-year-old officer, a World War I Marine Corps veteran just eight months into his career with the Police Department, attempted to pass the speeding car to wave it over. As he did so, Officer Moore collided with an oncoming car and was thrown from his motorcycle. He was transported to Mary Washington Hospital where he later died from his injuries. Officer Moore was buried at the Fredericksburg National Cemetery with full military honors, and he was remembered by then-Chief Silas Perry as "energetic, alert, willing, and courteous."