During the seventeenth and eighteenth centuries, settlement in Virginia spread west from the Tidewater region along the 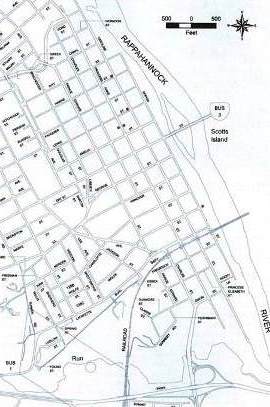 navigable rivers into the Piedmont. Already entrenched in the tobacco economy, settlers laid out sprawling plantations along the fertile soils of the river beds. Although the establishment of these large plantations engendered a dispersed, decentralized community, a number of small towns began to emerge as tobacco shipment inspection sites. One of the earliest written accounts of European exploration along the Rappahannock River dates to 1608, at which time Captain John Smith journeyed to the falls and encountered indigenous Native American settlements. The region was visited intermittently by explorers during the next several decades, and, in 1671, a patent was granted to Thomas Royston and John Buckner from Sir William Berkeley for 1 50-acre tract at the falls of the Rappahannock River. Forty colonists subsequently settled on this tract in what is now the commercial core of Fredericksburg. Fredericksburg's first grid plan was drawn up in 1721, and in 1727, the settlement received an official charter from the House of Burgesses and was named in honor of Frederick, Prince of Wales.

An inspection station was set up at the foot of present-day Wolfe Street and a cluster of wood-frame warehouses was hastily erected along the river. The organization of the town coincided with a large upswing in the plantation economy. By 1727, land holdings increased 60% and tobacco exports reached an all-time high. The population of Fredericksburg grew gradually, attracting merchants and artisans, and, in 1732, the town was eventually established as the seat of Spotsylvania County. The town grew rapidly, and, in 1739, additional land was purchased to accommodate this burgeoning population. Although the town of Falmouth, directly across the river from Fredericksburg, achieved more rapid, prosperous growth during the early days of settlement, the opening of a ferry service between Fredericksburg and Stafford in 1784 solidified its dominance as a thriving port and commercial center. The ferry service allowed farmers and plantation owners to transfer their crops directly to awaiting ships. Along with the warehouses, taverns and other small commercial ventures soon established themselves along the grid plan of the present-day commercial core.

In addition to commercial prosperity, the foundations of government and religious institutions were being laid in settlements across Virginia. During the early eighteenth century, the seat of justice in Germanna, a German settlement 18 miles north of the present-day Fredericksburg focused around an iron foundry, relocated to Fredericksburg. Similarly, St. George's parish, also originating in Germanna, established a church in Fredericksburg, electing Rev. Patrick Henry, uncle of the famous orator, as its first rector.