After 1750, Fredericksburg continued to prosper as a major port. From 1733-1773, the quantity and quality of Virginia's tobacco exports increased 150%. In addition to serving as an inspection point for the tobacco industry, Fredericksburg was integral to the trade along the Rappahannock River, acting as a "break-in-bulk" site for the goods coming over the river and passing onto 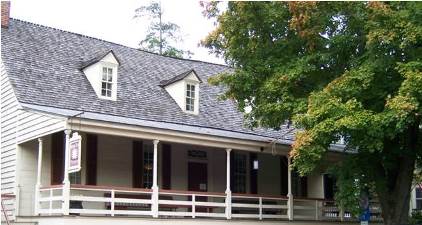 the crude interior roads. Warehouse facilities were necessary for storing the goods that needed to be broken into smaller parcels of freight. This trade with the hinterlands was the driving force behind Fredericksburg's early prosperity and growth as an urban center. The city also served as a major port of entry for European exports. Prior to the Revolution, nearly all goods came from Britain and were sold or bartered in local stores. This fueled the evolution of the commercial class in Virginia. Retail merchants established their businesses near tobacco warehouses, courthouses, and other central locations. A number of craftsmen, artisans, and tradesmen, such as blacksmiths, millers, doctors, druggists, and lawyers, also set up shop in these centralized locations, selling goods and providing a number of services to the growing population. The merchants saw great prosperity during this period and began to gain significant political power as well. In Fredericksburg and other merchant-dominated towns along the Rappahannock, the concentration of merchant political power reached a high of 50% (Armstrong 1974; Littlefield 1999). This prosperity in Fredericksburg resulted in the first expansion of the city's boundaries in 1759. With the intersection of Caroline and William streets as the focal point, attached, low-rise buildings soon crowded the city core.

Fredericksburg served as a meeting ground for patriots during the period of growing unrest that led up to the American Revolution. A draft of resolutions for declaring independence from Britain was drawn up at the Rising Sun Tavern, one of the earliest ordinaries in Fredericksburg. A number of notable political figures, many of whom were Revolutionary war heroes, emerged in Virginia during this period as founding fathers of the new nation, including George Washington and James Monroe, both from the vicinity of Fredericksburg. After the war, in 1781, Fredericksburg was officially incorporated as a town within the new Commonwealth of Virginia (Goolrick 1922).

Historic Fredericksburg: The Story of an Old Town.
Whittet and Sheperson, Richmond, Virginia.