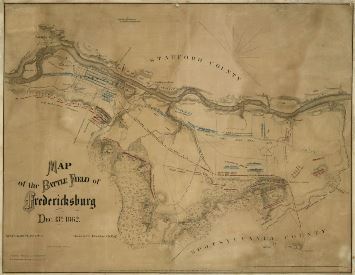 Fredericksburg played a major role in the Civil War, serving as the grounds for what was then the largest battle in America and the first urban battle since the Revolutionary War. On December 11, 1862, the Union Army of the Potomac, after bombarding the town with artillery fire, crossed the Rappahannock River and landed at the foot of Hawke Street. The Union Army charged into town and ransacked homes and businesses searching for Confederate soldiers. Caroline Street became a stronghold for the Confederates and thus received the brunt of the battle which extended south to William Street. Several churches and dwellings, including Federal Hill at 501 Hanover Street, were used as makeshift military hospitals, and the basement of the town hall served as a refuge for slaves during the battle. By nightfall, the Confederate Army retreated to Marye's Heights to the south of the town. Two days later, on December 13, a second assault was mounted at Marye's Heights. Confederate soldiers were strategically placed behind a stone wall along the Sunken Road. The battle resulted in significant casualties for the Union Army. The entire Battle of Fredericksburg resulted in 12,653 Union casualties and 4,201 Confederate casualties.